Remembering our Daffodil Friend and Mentor

By Jim Morris with input from Charles Pickett and Jason Delaney 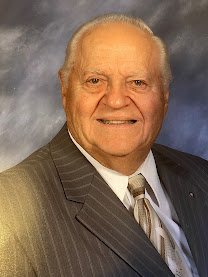 Dave Niswonger, 96, passed away February 2, 2022 of natural causes surrounded by his family at Cape Girardeau, Missouri.  I knew Dave for over 60 years and he more than fit the description of a great person.  He intended to impress no one and impressed everyone.

The “son of a preacher man,” Dave was born December 6, 1925 at Patton, Missouri, on his grandparents’ farm.  His father was a Methodist minister, and the family moved all over central and southeast Missouri in Dave’s youth.  His interest in gardening was stirred by helping his grandparents raise chickens, onion sets, sweet potatoes, etc.  He began raising his own tomatoes at age six, and by age twelve he had “branched out” to grafting cherry, walnut and pecan trees.  The stately English walnuts and pecans which grace his property today are a testament to his years of work.  Perhaps this is where he developed the patience to wait the required five to seven years to see his daffodils bloom from seed.

Prior to WWII Dave began pre-med training at age 16 at Central Methodist University.  Two years later he was a medical corpsman in the U. S. Navy stationed at a hospital in New York state.  After the war he returned to Missouri, attended and graduated from South East Missouri State University (SEMO) with a BS in Biology and a minor in chemistry.  He began employment for the Missouri Division of Health as a County Sanitarian inspecting milk dairies for adherence to state sanitation requirements.

He applied for and was awarded a scholarship to the University of North Carolina where he received his MS in Public Health.  Later he worked for the American Heart Association (AHA) as a regional consultant over 25 Missouri counties.  Next, because of his medical background of working with cardiac doctors in the AHA, Dave joined the SEMO Hospital in Cape Girardeau.  He was the hospital administrator there for 30 years, retiring in 1991.  His stellar career at the hospital included building an open-heart surgery program.  When he retired the hospital’s leadership created the O. D. Niswonger Spirit of Southeast Award in his honor.  Karen Hendrickson served as chief nursing officer during Niswonger’s tenure, working alongside him for more than two decades.  She said the Spirit of Southeast Award resonated within the hospital community.

“That became a very coveted award, and when people were deemed worthy of receiving it, it was one of the highest honors any employee would receive,” said Hendrickson.  “It didn’t matter if you were a physician, a housekeeper, a nurse, someone who worked in the support services – anyone was eligible to receive that award, and they accepted it with great pride.”

A past president of the American Iris Society (1996-1998), Dave is noteworthy for receiving two Dykes Medals (the highest award in iris hybridizing), and the premier award from the British Iris Society, the Sir Michael Foster Memorial Plaque in 2000.   He won many other awards for his iris hybridizing and was internationally known as “Missouri’s Mr. Hybridizer.”   His decade’s long hobby enriched his life.  “I’ve developed a lot of friendships around the world while developing iris,” he said.  “This iris has gone a long way from when they were discovered as wild flags in the mountains of Europe.  They are now 25 to 30 generations away from the original species, and friendships in the United States, Russia, Germany and many other countries have been cemented because of them.”

Niswonger focused many of his efforts on creating specifically colored flowers and giving many of them names of good things to eat. 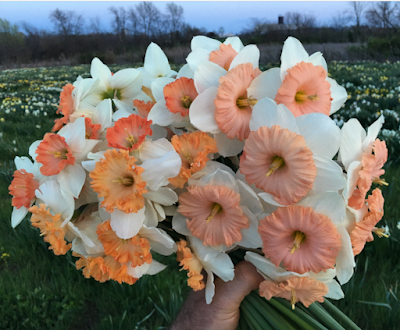 Encouraged by wife Marie’s love of daffodils – and with advice from his long-time friend and fellow hybridizer Sid DuBose, and daffodil giant Grant Mitsch – Dave began hybridizing daffodils in the late 1970s, with his ultimate goal being a brilliant yellow-pink daffodil that would perform in the Midwest, manifesting the same richness of color and plant stamina found in cultivars originating in the Pacific Northwest – many of which often failed to withstand our climate extremes.  Though this goal was not fully realized, the byproducts of such endeavors created a wealth of truly “weatherproof” decorative large-cupped daffodils with stamina, colors, and ruffles to spare, predominately pinks, and always “favorites of the ladies.”

His large-cupped pink daffodils are flamboyant and die-hard exhibitors and even many breeders of exhibition daffodils have overlooked Dave’s hybridizing work. While his ‘Traveling On’ (2000,  2YYW-WWO) is probably his best exhibition daffodil, the bouquet of pinks shown here in the photo are stunning in the garden.  He used a Mitsch seedling #7 in the beginning along with ‘Ice Follies’ (1953, 2W-W), notably an older variety although a Classic and Wister Award winner.  Every true gardener who grows any of his daffodils immediately notices Dave’s fine contribution to the daffodil world through his vigorous clumps of varieties that perennialize beautifully, returning year after year.  And for those who like ruffles, hooks, knobs, teeth and flecks – akin to those found on modern daylilies, another of Dave’s hybridizing successes – his early work with ‘Ice Follies’ unlocked some of the “toothiest” genetics yet seen, manifesting ruffles like barracuda or shark’s teeth on corona edges in the second and third generations, all on plants with the same vigor and robustness of ‘Ice Follies’.  Dave’s ‘Dangerous Dentures’ (2011, 2W-Y) and a seedling, under the moniker “With Teeth,” are a testament to the success of a plant breeder who paves his own path.  In total Dave registered 30 daffodils from 1993 to 2018, and several more are being bulked for future introduction.  His daffodil seedlings are now being grown by Jason Delaney in Flora, Illinois. 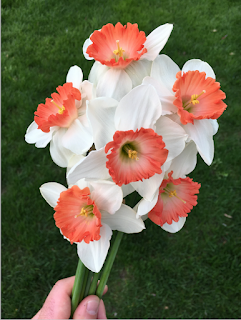 Dave and his late wife Marie had two sons, David III and John, and a daughter Mary Dee.  They were at his side when he passed.  Dave’s good nature and hearty encouragement will be missed by many.  Yet he will always be remembered each spring when his flowers bloom.  Our gardens are all the richer thanks to Dave Niswonger’s many fine accomplishments.

Posted by Greater St Louis Daffodil Society at 10:34 AM No comments:

Greater St Louis Daffodil Society
Our organization was founded during 1998, for the purpose of promoting daffodils, stimulating the interest of the public in daffodils through education, shows, exhibits, and tours.